BANGKOK, November 28, 2022 - Happiness, joy, smiles, opportunities, care, and support from Thai people to children in Southern provinces and other provinces return once again with the 13th “Million Gifts Million Smiles” project, sharing gifts from the heart, as well as smiles, hope, and support. The project is organized by Central Group in partnership with the Royal Thai Army, Equitable Education Fund (EEF), and its network, inviting Thai people to send New Year and Children’s Day presents, as well as scholarships for 2023, to children in southernmost provinces and other provinces through three main channels: supporting scholarships for underprivileged children through the Equitable Education Fund, sending gifts at donation points, and donating cash to support the purchase of sport equipment and school supplies to send happiness and support to children in need, starting from today.

Busaba Chirathivat, Executive Vice President, Corporate Communications of Central Group, said that Central Group is committed to continuing its mission to spread warm wishes, opportunities, smiles and support through gifts and scholarships during the New Year and Children’s Day. While the COVID-19 situation has improved and normalcy has returned, the sudden economic impact and the inflation in Thailand continue to be worrying, as many children have left the education system due to unemployment. This year, Central Group partners with the Royal Thai Army and EEF to continue the 13th edition of the Million Gifts Million Smiles project with the concept “FROM THE HEARTS TO THE SMILES” under the group’s Central Tham project. There are three themes of giving: Pay it Forward, Give it Forward and Share it Forward, to add options for those who want to offer great opportunities to those in need.

Central Group invites Thai people, government entities, private sectors, and partners to give education opportunities or new gifts, such as bicycles, school supplies, sport equipment, stationery items, or toys, to children residing in southernmost provinces and other provinces, to bring happiness and smiles during the New Year and Children’s Day 2023. There are three main channels:

Maj.Gen. Arnuparp Sirimonthon Deputy Director Of The Directorate Of Civil Affairs, said that the Royal Thai Army and Central Group have joined forces in the 13th “Million Gifts Million Smiles” to share gifts from the heart to bring smiles, hope and support to those in need. Over the past several years, Central Group’s dedication and commitment has been evident, as it continues to send happiness to children in southernmost provinces. This is in line with the Royal Thai Army’s commitment. The gift caravan this year will be led by the Royal Thai Army, bringing presents to children in southernmost provinces as New Year and Children’s Day 2023 presents. The Royal Thai Army hopes that by receiving these gifts, the children will be motivated to grow up to be quality adults who will drive our nation forward.

Central Group invites everyone to share happiness and opportunities to children in southernmost provinces and other provinces, bringing a smile to their faces, by sending gifts and scholarships under the 13th Million Gifts Million Smiles project. For more details, visit Facebook CENTRALGROUP or Instagram CENTRAL GROUP. 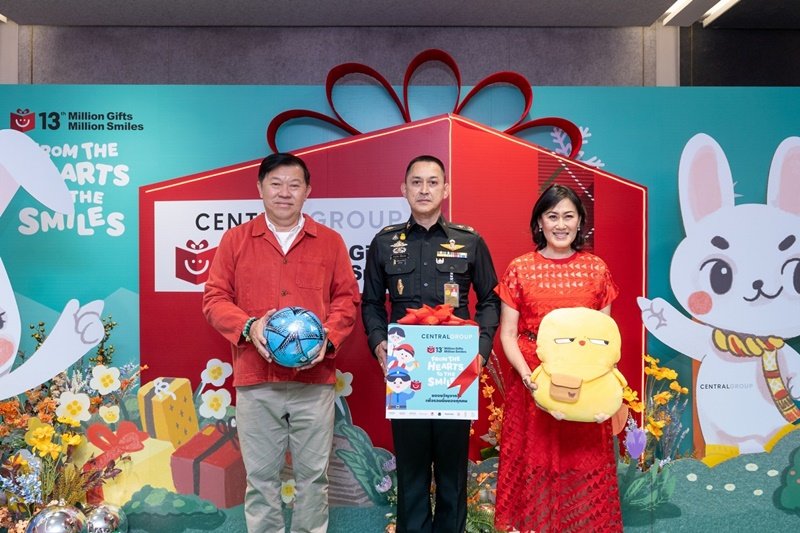