November 8, 2022 - Hollywood icon returns home to Vienna! High-profile guests from the worlds of fashion and lifestyle as well as business partners congregated to celebrate the unveiling of Central Group and SIGNA’s new luxury department store glamorous name: LAMARR. The unveiling of LAMARR marks the first time in over eight decades that a new brand has entered the luxury department store scene in Europe. The store is named after the famous 20th century Hollywood star, Hedy Lamarr, who many regarded as the most beautiful woman in the world. LAMARR will not only commemorate the legacy of Hedy Lamarr’s, but will also bring her back to the city she had always longed to return.

Amongst the top-notch guests were Tos Chirathivat - Executive Chairman and CEO of Central Group, Morakot Sriswasdi - Ambassador of Royal Thai Embassy in Vienna, Lodi Rice Loder - Granddaughter of Hedy Lamarr’s, Daniel Grieder - CEO of Hugo Boss, and Ermenegildo Zegna - owner of Zegna, with supermodel Toni Garrn hosting the gala. LAMARR is set to become the fifth luxury department store of the KaDeWe Group, alongside KaDeWe in Berlin, Alsterhaus in Hamburg, Oberpollinger in Munich, and Carsch-Haus in Düsseldorf.

Tos Chirathivat said, “We are honored to name our first Austrian store after a widely beloved and respected Austrian legend. Beyond her Hollywood fame, Hedy Lamarr was a gifted inventor ahead of her time. Her exceptional and multifaceted qualities perfectly represent our LAMARR - a world-class luxury department store with complete lifestyle offers and state-of-the-art design and experience.”

André Madre, CEO of KaDeWe Group, said: “The LAMARR belongs to Vienna’s residents, and it is set to be the pride of the city. Hedy Lamarr is simply an icon to us. She was a world star, impressively intelligent, glamorous, and international - many considered her to be the most beautiful woman in the world. She was an incredibly exciting personality that we want to honor here, in the city where she was born.”

Born under the name Hedwig Kiesler in Vienna in 1914, she later made a breakthrough to become an international star through her iconic role in the film “Ecstasy” in 1933. Hedwig fled to Hollywood in 1937 and later changed her name to Hedy Lamarr, following the advice of film mogul and MGM co-founder, Louis B. Mayer. Her very first Hollywood feature film Algiers made her world-famous, followed by numerous successful roles. In 1960, Hedy Lamarr was honored with a star on the Hollywood Walk of Fame. Her generous attitude was also legendary, as displayed in this memorable quote: “Spend your money. Most people save their money their whole lives and then leave it to someone else. Money’s there to be enjoyed.”

While Hedy Lamarr achieved worldwide fame as an actress, her other groundbreaking talents were unknown by the public for many years. She was progressive inventor responsible for, for example, the frequency-hopping process that she patented that is the basis of pioneering technologies such as mobile communications, Wi-Fi and Bluetooth. She was inducted into the National Inventors Hall of Fame in 2014. Since 2018, the City of Vienna has awarded the Hedy Lamarr Prize to innovative female scientists.

LAMARR will express different facets of Hedy Lamarr’s life and work, designed by O.M.A., a world-renowned architecture firm and curated by Danielle Spera, the former director of the Jewish Museum in Vienna. Visitors will encounter Hedy Lamarr again and again, at the specially designed Museum Cafe on the fifth floor, and on walls, between showcases, or in the elevator, the actress or her memorable quotations will repeatedly appear as projected imagery.

The mixed-use project in Vienna occupies 7,500 square meters of land on Mariahilfer Straße. The 58,000 square meter development comprises the LAMARR store, luxury department store with 1,000 square meter rooftop park with lush greenery, designed as a public recreational space, and the Thompson Vienna hotel with 150 rooms. A logical complement to LAMARR, the hotel is strongly gastronomy and F&B oriented. Visitors can enjoy terrace seats in the gallery garden that connects the hotel to the store. Hotel lobby will come to life with co-working areas, as well as socializing spaces for both locals and hotel guests with almost 170 seats.

With eight floors and 20,000 square meters, LAMARR will bring together leading international brand partners such as Louis Vuitton, Gucci, Prada and Bottega Veneta, as well as local brands that represent Vienna. Opening planned for 2024, LAMARR will be completed with exquisite range of products, well-rounded categories, and best-in-class services, ranging from medical services, spa, events, and art exhibitions. 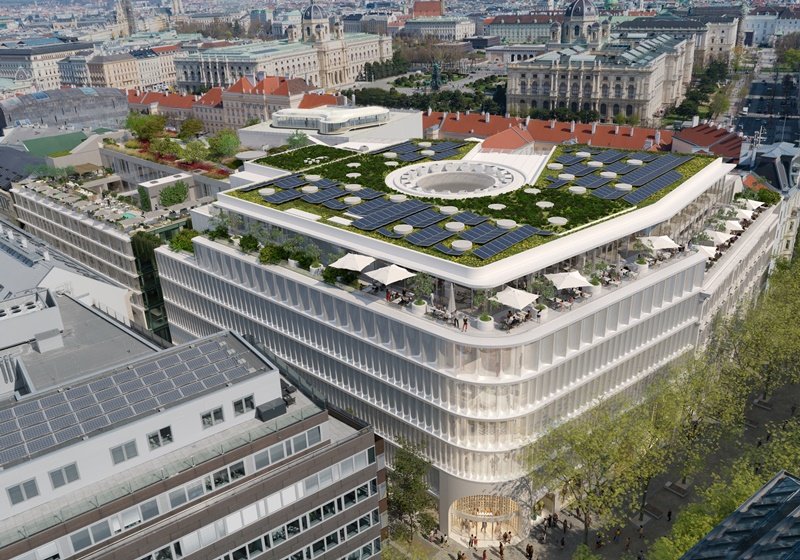 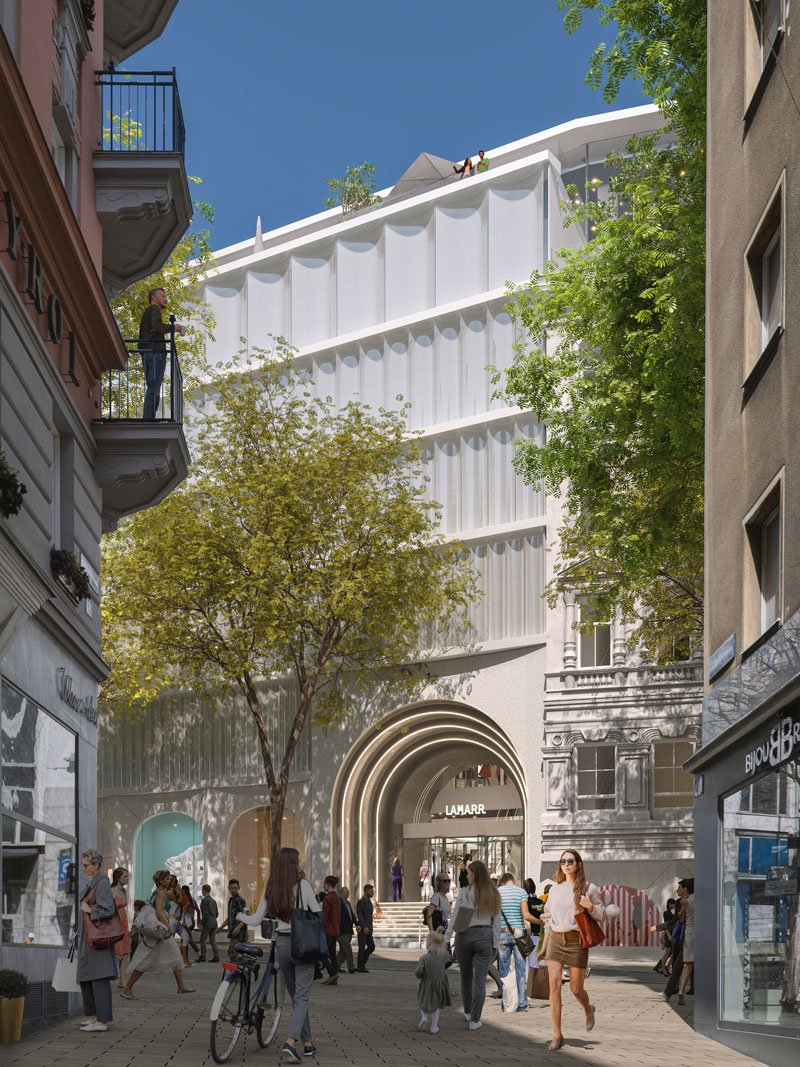