Bangkok – Central Pattana plc., the leader in Thailand's real estate development industry, has strengthened its business with the signing of a memorandum of understanding (MOU) to acquire ordinary shares of Siam Future Development plc. (SF) from Major Cineplex Group plc. (MAJOR) equal to 30.36% of all issued shares at the price of 12 baht per share or approximately 7.7 billion baht in total, with the transaction expected to be completed at the end of August 2021 and a tender offer for the remaining shares to be filed afterwards.

The acquisition will reinforce Central Pattana's property development portfolio, which will have in total of two Super Regional Malls, namely Central WestGate and Mega Bangna, and help the company grow together with world-class partners like IKEA. The company, together with other businesses within the Central Group, will also move forward to expand its community mall businesses and develop new projects in various land banks in Bangkok's central business district (CBD) and in other major cities across Thailand.

Mr. Preecha Ekkunagul, President and Chief Executive Officer of Central Pattana plc. said, "This acquisition marks another historic step of Central Pattana as it moves forward to create short and long-term growths in according to the strategic plan. The company is happy with the MOU with MAJOR, which has long been a business partner of the company, and believes this deal will benefit both SF and MAJOR shareholders."

"Central Pattana sees the potential of the acquisition of SF businesses as it will expand the company's portfolio to include two successful super regional mall projects, namely Central WestGate and Megabangna. In addition, the deal will enable future joint investments with IKEA, which is a global leader in retail business," said Mr. Preecha.

"Central Pattana also plans to add more community malls and increase the land bank in its portfolio, especially in areas with high potential such as Bangkok's CBD and large provincial cities. It aims to create even more perfect 'centers of life' for communities, increase competitiveness, drive business growth and create good returns from investments," he said.

"Central Pattana has a strong capital structure and an ability to manage its business with high efficiency. After the acquisition, the net debt-to-equity ratio (net D/E) will be lower than one and the company will continue to develop more mixed-use development projects and look for new investment opportunities that will benefit all stakeholders under the 'Imagining Better Futures For All' organisational goal," said Mr. Preecha.

Mr. Vicha Poolvaraluk, Director and Chief Executive Officer of Major Cineplex Group plc. (MAJOR), said, "The deal will give a good return to our business and the shareholders in both short and long terms. It will also strengthen our ability to expand our business and reinforce our leadership in the cinema and entertainment complex business. We are happy that our business partner Central Pattana, which is a leader in the real estate sector, will become the major shareholder of SF."

Central Pattana plc. is the developer and operator of 34 shopping centers with a total rental area of 1.8 million square meters, consisting of 15 shopping centers in the Greater Bangkok area, 18 in other provinces and one in Malaysia.

Some of residential projects are under Grand Canal Land plc. (GLAND), in which Central Pattana is the major shareholder. GLAND has developed a number of property projects and has more upcoming projects in high-potential areas of Bangkok.

With other renowned partners, the company is jointly developing world-class projects, such as Dusit Central Park.

Siam Future Development plc. (SF) is a shopping center developer and operator with 18 existing projects under its management, ranging from neighborhood centers, lifestyle centers, power centers, a stand-alone retail store, an entertainment center, and a super regional mall. Megabangna and other shopping centers under SF in Greater Bangkok has a total rental area of over 400,000 square meters.

Major Cineplex Group plc. (MAJOR) has been Thailand’s leading entertainment and cinema company for over 35 years. It currently operates over 800 cinemas, including standalones and cinemas within shopping centers and lifestyle malls. It also manages other relevant businesses, such as bowling alleys, karaoke venue, ice skating rinks, advertisement media, rental and service spaces, and movies. 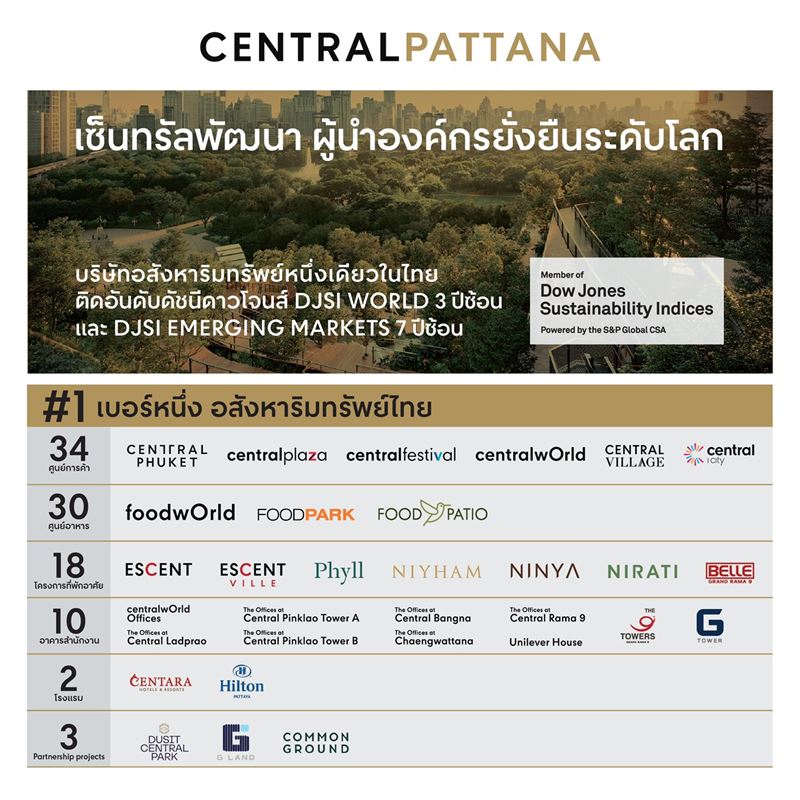