Bangkok, 16 September 2019 – The Coca-Cola system in Thailand has signed a Memorandum of Understanding with Central Group Company Limited and other partners under which they will collaborate on the 'Coke Collects x Central Group Journey to Zero' project. This is designed to set up and support a source separation system for recyclable waste including beverage packaging generated at Central Group’s Department Stores and deliver the materials to partners for proper recycling. The system is being piloted at Central Restaurants Group-owned restaurants at Central Festival Eastville and Central Plaza Bangna with an aim to expand to the other Central malls in Bangkok and its vicinity, as well as in other major cities across the country in the near future.

As part of The Coca-Cola Company’s World Without Waste commitment, ‘Coke Collects’ focuses on responsible use of beverage packaging to reduce waste and minimize environmental impacts. One of the global goals is to collect and recycle the bottles and cans sold by the company and achieve 100% packaging recovery by 2030. In Thailand, the Coca-Cola system already has a sizable returnable glass bottles business, which allows for a near complete reuse of these bottles. ‘Coke Collects’ is thus an experimental collection system at source for non-returnable packaging, such as PET bottles, aluminum cans, non-returnable glass bottles and beverage cartons. The system aims to promote systematic waste separation and Coca-Cola has engaged GEPP, a startup that has developed a modern online waste collection platform, to set up the system and work with Central Group to segregate waste at source and deliver it directly to packaging recyclers. The project’s main objective is to promote recycling and waste reduction which precisely coincides with that of Central Group’s Journey to Zero project.

Pornwut Sarasin, Chairman, ThaiNamthip Company Limited, said: “As the leader in the non-alcoholic beverage segment, the Coca-Cola system in Thailand is well aware that we have a responsibility to promote waste separation at source and ensure that all beverage packaging and other recyclable materials go for recycling. At the same time, we also realize that this is a challenging undertaking to achieve a 100% packaging recovery commitment by 2030. For that reason, we are working closely with partners to drive this change by developing and piloting a new collection system for this packaging. We have been working with GEPP, the startup that helped us bring our vision to life through technology. GEPP’s platform also collects data that we can analyze as the basis for further developing the system in the future. However, we would be unable to succeed in our efforts without strong support from Central Group and all the recycling partners who are willing to make significant changes to their operations to make this work. We would like to take this opportunity to thank them for their dedication and efforts in combating the waste issue.”

Pichai Chirathivat, Executive Director of Central Group, explained: “Throughout our 72 years of operations, Central Group has been actively involved in promoting environmental conservation through the ‘CENTRAL Group Love the Earth’ project, which benefits the organization, communities and the broader economy. The project has three pillars: Journey to Zero (waste and carbon emission reduction), Central Green (design of green spaces around the shopping center), and forest restoration.”

“Coke Collects x Central Group Journey to Zero’ project is a partnership that aims at promoting waste segregation and recycling following the principle of circular economy. We have already piloted waste separation at source with restaurants under Central Restaurants Group (CRG) at Central Festival Eastville and Central Plaza Bangna under the management of Central Pattana Public Company Limited (CPN). The program includes recycling such waste as plastic and glass bottles from CRG’s restaurants, which has been made possible through redesigning the process and practices for waste collection and segregation. The income generated from selling these recyclables is to be returned to staff and stakeholders who help with segregation and collection. If the project proves to be a success, we are planning to collaborate with Coca-Cola in rolling out the operation throughout Bangkok and its vicinity, as well as in other major cities where we have shopping centers. Central Group is delighted to be working with partners who share our vision and intent to minimize environmental impacts from waste and promote recycling for a better world.” Pichai added.

GEPP is also vital to the successful operation of ‘Coke Collects x Central Group Journey to Zero’ and has developed a digital platform that connects the three stakeholders in the project, namely the restaurants with recyclable materials from waste segregation, recyclable buyers, and recyclers. Through GEPP, restaurants are directly connected to recyclables buyers who will sell recyclables to recycling partners, namely BG Container Glass Company Limited (glass), Thai Beverage Can Company Limited (aluminum can), Wasterial Company Limited (paper and beverage cartons), SCG Plastics Company Limited (HDPE, LLDPE, LDPE, and PP plastic), and Indorama Ventures Public Company Limited (PET). These direct shipments are expected to yield greater profits from the sales of recyclables since there is no middlemen, enabling both Coca-Cola to reinvest this money into project expansion. Additionally, Central Group plans to return parts of the revenue from the project to every stakeholder who helps collect and separate waste. Adopting this collection system not only underlines the shared value principle, but it also yields real fair shares to the participating parties, which is at the heart of every sustainable system.

Mayuree Aroonwaranon, Co-Founder and CEO of GEPP, said, “A lot of people want to take part in solving the waste issue, but the current structure and system in Thailand does not allow this and that’s where GEPP comes in. For this project, we have played an active role in training staff, designing the waste separation areas in the restaurants, and scheduling times for buyers to collect it. Moreover, we also collect and analyze data on waste collection and sale under this project for future development and to help Coca-Cola and Central extend the program.

"Today, nobody can refuse that waste is a major global environmental issue. At the same time, packaging remains a crucial component in the delivery of products from manufacturers to consumers in a clean, safe, and affordable manner. Eliminating all packaging is therefore not a practicable solution. What is needed is for every business operator to use packaging more responsibly, reduce quantities when possible, and recycle all materials that can be recycled. The issue has become so critical that we can no longer rely only on the government to work on this issue; everyone must take part. Coke Collects is one such effort of ours and we are committed to having a wider impact by constantly expanding our partnerships. No single organization can succeed in this mission alone," Pornwut concluded. 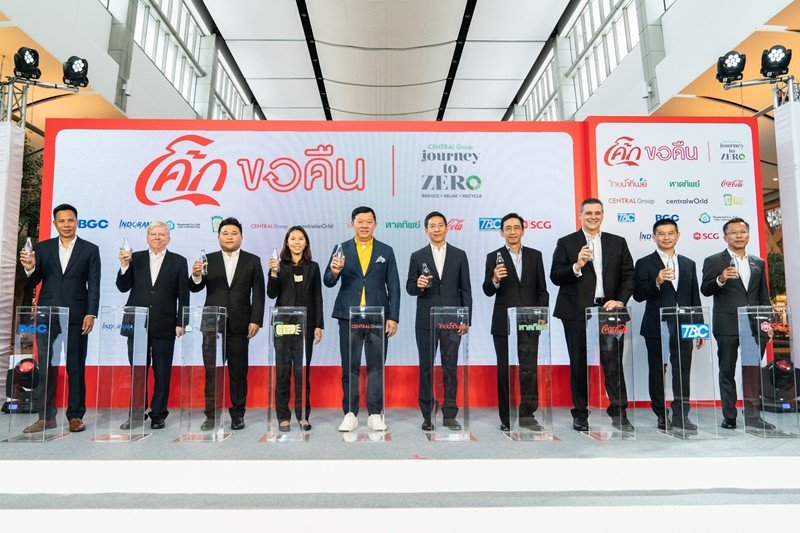